You are here: Home / Awards / NAMF Award for Excellence 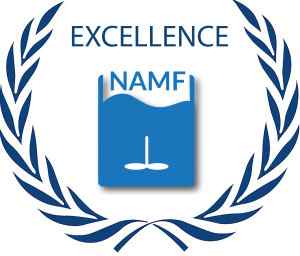 NAMF Award for Excellence and Sustained Contributions to Mixing Research and Practice is given annually to a NAMF member who is a resident of North America. The award, which consists of a cash prize and a plaque, is sponsored by the Dow Chemical Company and is presented at the NAMF Awards Banquet at the AIChE Annual Meeting.

Any member of NAMF may nominate candidates. Once nominated, a candidate does not have to be nominated again in the next year. While there is no formal nomination procedure, it would be helpful if a short resume of the nominee and his/her specific contributions to fluid mixing technology are discussed.

The North American Mixing Forum is currently accepting nominations for the Award for Excellence and Sustained Contributions to Mixing Research and Practice. A letter of nomination should identify the candidate and include examples of impact in the following areas:

A strong nominee should show contributions to multiple or all these areas of mixing excellence. Applications received from multiple sources may provide a more complete background of a nominee for consideration by the award committee. The nominee should be someone broadly recognized in the community of mixing practitioners, including NAMF members.

Please submit complete name, affiliation, and contact information for both the person making the nomination and the person being nominated to David S. Dickey, Chair of the NAMF Award Committee, at d.dickey@mixtech.com.
***
Sponsor: Dow Chemical Company
Description: Award for Excellence and Sustained Contributions to Mixing Research and Practice
Deadline: To be confirmed
Award: Plaque, $1,000, plus a $500 travel allowance
Presentation: An award lecture and a dinner ceremony during the AIChE Annual Meeting.