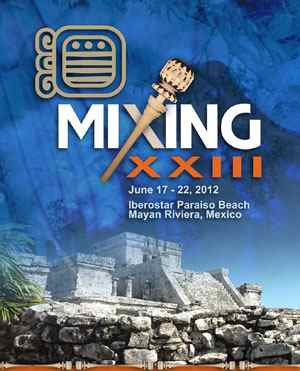 Every two years since 1967, the mixing community in North America meets to share and discuss the latest research and technology developments in mixing. Participants come from academia, industry, and private and government research institutions in North America and all around the world.

Mixing XXIII will take place in the Riviera Maya, in Mexico for the first time. This year’s conference include an additional night to be able to not only cultivate our scientific inquisitiveness but also nurture our souls by learning about this ancient culture that was able to have great achievements in astronomy and mathematics. The Maya culture also provided the world with a highly sophisticated device for efficient mixing!

Come and join us and learn about it in June 2012 in the beautiful State of Quintana Roo, Mexico, in the heart of the Riviera Maya!

Report from the NAMF President >>